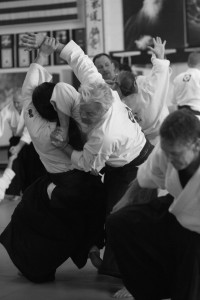 Nathan has been training in Aikido since 1993, studying under Tatoian Sensei, Noel Kennedy Sensei, Jay Bell Sensei, and Lynn Johnston Sensei.  He has served as uchi deshi with Hitohira Saito Sensei in Iwama, Japan. He began teaching Aikido to kids and teens in 2004 with Pathways Charter School and teaching adult classes at Traditional Aikido of Sonoma since 2007 under the direction of Kennedy Sensei with whom he has trained since 1995.

In 2014 he established Takemusu Aikido of Sebastopol as a branch dojo of T.A.O.S.

Julian has been training under Tatoian Sensei and Kennedy Sensei since 2002. Instructor and dojo-cho at Traditional Aikido of Sonoma State University. He has served as uchi deshi with Hitohira Saito Shihan in Iwama, Japan. shay@sonoma.edu

With a background in both Goju and Kempo Karate. He has been a student of Tatoian Sensei since 1992. Since that time, he has studied with many teachers in the US, and served as uchi deshi with Morihiro Saito Shihan at the Ibaraki Aikido Dojo in Iwama, Japan. He has also spent several years teaching Aikido to children.